If you have long hair and want beachy, natural-looking waves, you need a curling wand.

First things first, what’s a curling wand? It’s like a curling iron, except the barrel you wrap the hair around is tapered, and there’s no clamp.

Reviews of the Best Curling Wand for Long Hair

One of the reasons why the Remington Pro is a best curling wand for long hair is because of its relatively large barrel. The barrel measures from 1-inch to 1.5-inches in diameter, allowing you to create bigger waves.

Other features the curling wand has include nine heat settings (with a maximum temperature of 410 degrees Fahrenheit), auto shut-off after 60 minutes, and rapid heat-up, in just 30 seconds.

You can adjust the heat settings on the curling wand using digital controls, making it easy to see how hot the wand is and to raise or lower the heat as needed. As a bonus, the curling wand comes with a heat protectant glove, which protects your hand from burns as you style your hair.

People who’ve used the Remington Pro Curling Wand either love it or hate it. Those who love it love the types of waves they get from the tool. Those who hate it claim that it doesn’t style their hair at all and that the gloves it comes with aren’t heat proof. 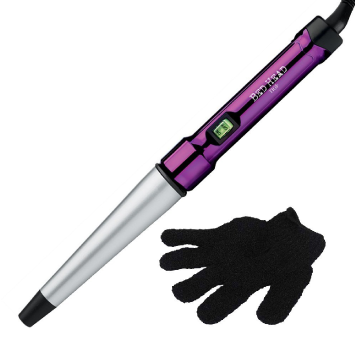 One of the great things about the Bed Head Curlipops Tapered Curling Wand is that it’s dual-voltage, so you can use it pretty much anywhere in the world where there’s electricity.

Another great thing about the curling wand is that it has a Tourmaline-Ceramic coating on the barrel, which helps to minimize frizz while boosting shine. The curling wand heats up to 400 degrees Fahrenheit and includes a swivel cord to reduce tangling.

People who have used the curling wand have been impressed by how quickly it was able to curl their entire head of hair. Some claimed that it took less than 30 minutes to style their hair with the tool.

Those who weren’t as impressed with the tool noted that there’s no temperature control — the curling wand gets HOT, and that’s it. Some also complained that theirs broke or refused to power on after just a few months of using it.

The xtava It Oval Hair Curling Wand has 22 different heat settings, making it ideal for use on a wide variety of different hair types. Whether you have thick long hair or fine long hair, there’s a heat setting on this styling tool that will work for you.

The heat settings on the curling wand range from 200 degrees Fahrenheit all the way up to 410 degrees. A digital display makes it easy to see exactly how hot the curling wand is, so you don’t end up burning your hair or struggling with a wand that’s not hot enough.

To keep you safe from burns while you style your hair, the curling wand comes with a heat-proof glove and a cord that swivels 360 degrees around the base of the tool.

People who’ve used the curling wand from xtava have praised its ease of use, especially the beginners. Users have also been happy about how long their curls lasted after styling, with some people stating that they had their wavy style last for two full days.

Some people who used it noted that the digital controls were placed in an awkward spot and that they kept accidentally bumping the controls while styling their hair. Others noted that they weren’t thrilled with the type of curls the wand created. 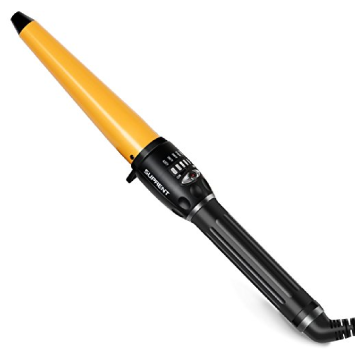 The SUPRENT curling wand boasts a slightly wider barrel than other models (3/4 to 1 1/2 inches) and heats up hotter than the rest — up to 430 degrees. It has five heat settings, starting at 270 degrees Fahrenheit.

One of the benefits of the curling wand is the fact that it has dual voltage, so you can bring it along with you wherever you go.

The curling wand seems to have a lot of happy users behind it. Some claimed that their hair never holds a curl, except when they use this curling wand. Others noted that it’s important to use the curling wand on a moderate heat setting rather than the high heat setting to avoid frying your hair.

The key feature of the BESTOPE 5 in 1 Professional Curling Iron Wand set is that it comes with five interchangeable barrels.

Depending on the type of curl you want, you can use one of the three tapered wands, the bubble wand or the straight wand to style your hair. The barrels are easy to insert and remove from the base of the wand, so you can change your style pretty much whenever you feel like it.

The curling wand set heats up to 410 degrees Fahrenheit in just 60 seconds. The drawback is that there’s no heat setting control, so you’re stuck using a very hot curling wand even if you have fine hair.

Users of the curling wand set have been happy with the flexibility it offers, but it’s a mixed bag when it comes to how well the set curls hair. Some find that it curls and styles their hair quickly while others find that it doesn’t do anything for their hair.

Although you might hear people use the terms curling wand and curling iron interchangeably, the truth is that the two are pretty different.

They don’t only differ regarding what they look like, but also regarding how you use them and the type of curls you can create with the tools.

Let’s start with looks because that’s likely the first thing you’ll notice about either a curling wand or a curling iron.

First things first, the barrel. The barrel of a curling iron is the same diameter at the top and the bottom.

Curling iron barrels also have a clasp or clamp to hold your hair in place while you style it.

In contrast to a curling iron, a curling wand doesn’t have a clamp or clasp. The barrel of a curling wand is also usually tapered so that it’s narrower at the tip compared to the base.

You can use a curling wand only to create waves in your hair. Since it doesn’t have a clamp to hold the hair, you won’t get springy ringlets from it.

One last difference between the best curling wand for long hair and a curling iron: How you use the tools.

How to Use a Curling Wand

Using a curling wand can take some getting used to, especially if you’re used to using a curling iron. To get started, choose a side of your head to curl first.

Hold the wand in the opposite hand (so if you’re starting on the left side of your head, hold the wand in your right hand). Position the wand up near your head, with the pointy end facing down and the cord end pointing up.

Grab a 1/2 inch section of hair and begin wrapping it around the curling wand, from the base of the wand. Wrap the hair around the wand until you have about an inch or two left at the end.

Hold the hair around the wand for a few seconds, then release. To let the hair free, simply pull the wand up.

Pull on the ends of the hair gently if you want to soften the wave a bit. Continue curling the hair until you’ve done every section on one side of your head.

Switch hands, then curl the hair on the other side of your head. Once you’ve finished, spray your hair with hairspray to help hold the waves.

Is a Curling Wand Better Than a Curling Iron for Long Hair?

The million dollar question: Is the best wand curling iron better for long hair than a standard curling iron?

The answer? It all depends. Some people prefer a curling wand to a curling iron because they want more natural looking waves, rather than full-on Shirley Temple style curls.

But a curling wand is less flexible than a curling iron, as you can only make waves with it.

Some people find that having both tools — a curling iron and a curling wand — in their line-up is ideal for their hair styling needs.

Final Thoughts on the Best Curling Wand for Long Hair

The curling wand is made by a trusted brand, is wide enough to accommodate long hair and have a special, super resilient ceramic coating. It’s got digital controls that make it super easy to change the temperature of the curling wand as needed.

If you’re looking for the best curling wand for long hair, you really can’t go wrong with the Remington Pro.